⚠️ Security Notice: The only Rolimon's website is www.rolimons.com and we don't offer any browser extensions. Beware of fakes!

Recently there has been a large increase in the number of fake Rolimon's websites and other scams attempting to compromise your Roblox account. Please read the following list of common security risks our users face, and always be cautious with your Roblox account's security.

Many fake Rolimon's websites claim to have an "Item Checker" or "Poison Checker", which supposedly checks if a Roblox item is stolen. These are all fake Rolimon's websites! We do not have an item status checker of any type, and probably never will. These websites don't actually work, and if you use them your Roblox account is likely to be stolen.

Rolimon's does not offer any browser extensions, nor do we endorse any of them. Any extensions that use Rolimon's values or data are not affiliated with us. Please be aware that using malicious extensions or extensions with security flaws could cause your Roblox account to be stolen.

Fake "Rolimon's Support" servers and other types exist, and are typically designed to scam unsuspecting users. We only have three official Rolimon's Discord servers, each listed below, so make sure you don't join any others. 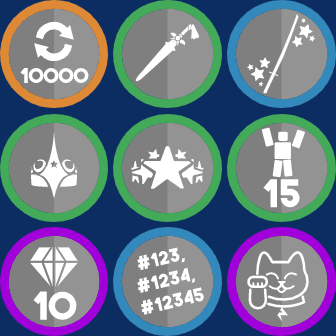 Roblox has released their first new limiteds after nearly 18 months as part of their Gucci Garden event!

Check your item inventory, value, and other stats, or track your progress with our player history chart
Players

See upcoming Roblox items before they are released!
Leaks

View the list of the wealthiest Robloxians! See your own rank and check your trading progress
Leaderboard

Earn your own RoliBadges as you complete Roblox trading achievements!
RoliBadges

Be Part of the Community

How we calculate Robux Spent

Players purchase Gucci Garden event items in-game with Robux for a fixed price. After an event item goes limited, this site scans all existing copies of the item and calculates the total Robux spent based on the number of copies and the in-game sale price.

Only sales of new items released during the Gucci Garden event are counted toward the total Robux spent, not the sale of any other limited items.

Accuracy of tracked sales can vary due to technical limitations, especially when sales of a specific item happen very quickly. Additionally, some of these items were added to this site several minutes after they went limited, causing many early sales to go untracked by our catalog sale tracker. This means the actual Robux spent due to resales is probably significantly higher than the number we show, perhaps by as much as 10 percent or more.