Lets dive into the world of Clockworks and the fascination behind the beloved Workclock series.

Gift-Card Items? Who was Clockwork? When can we expect the Workclock series to release? Let's take a look at these questions and much more!

Clockwork🔗 or Alex Quach was a former Roblox administrator during the Summer months of 2007 and 2008. Alex (Clockwork). After his internship ended, Alex left to start his career at Blizzard Entertainment and aided in the development and completion of StarCraft 2.

Due to the enigma that was Clockwork and his subsequent disappearance, some players theorized the admin account was terminated due to his departure from the company because Roblox didn't have a method of revoking admin privileges from accounts. However, these theories were later disproven as Alex's account has been reinstated and was last seen online 15 years ago.

The original Clockworks were released as a headphones + shades set, with the headphones having been published on November the 27th 2007 for 3,000 Robux and subsequently going on and off sale multiple times.

The original Clockworks were released as items called Headphones🔗 and Shades🔗. They were published to the catalog on the account Clockwork on March 28th 2008. These items have never been on-sale and were transported to the Roblox account some time in 2016 when the groundwork for the UGC program was made, many of Clockwork's items were moved in the process, amongst which are the Teapot Turret🔗, Princess Hat🔗 and O NOES🔗. Roblox published a copy of these items to the catalog on June 13th 2009 following the demand around the items.

Clockwork himself interestingly does not own any of the limited clockwork items. 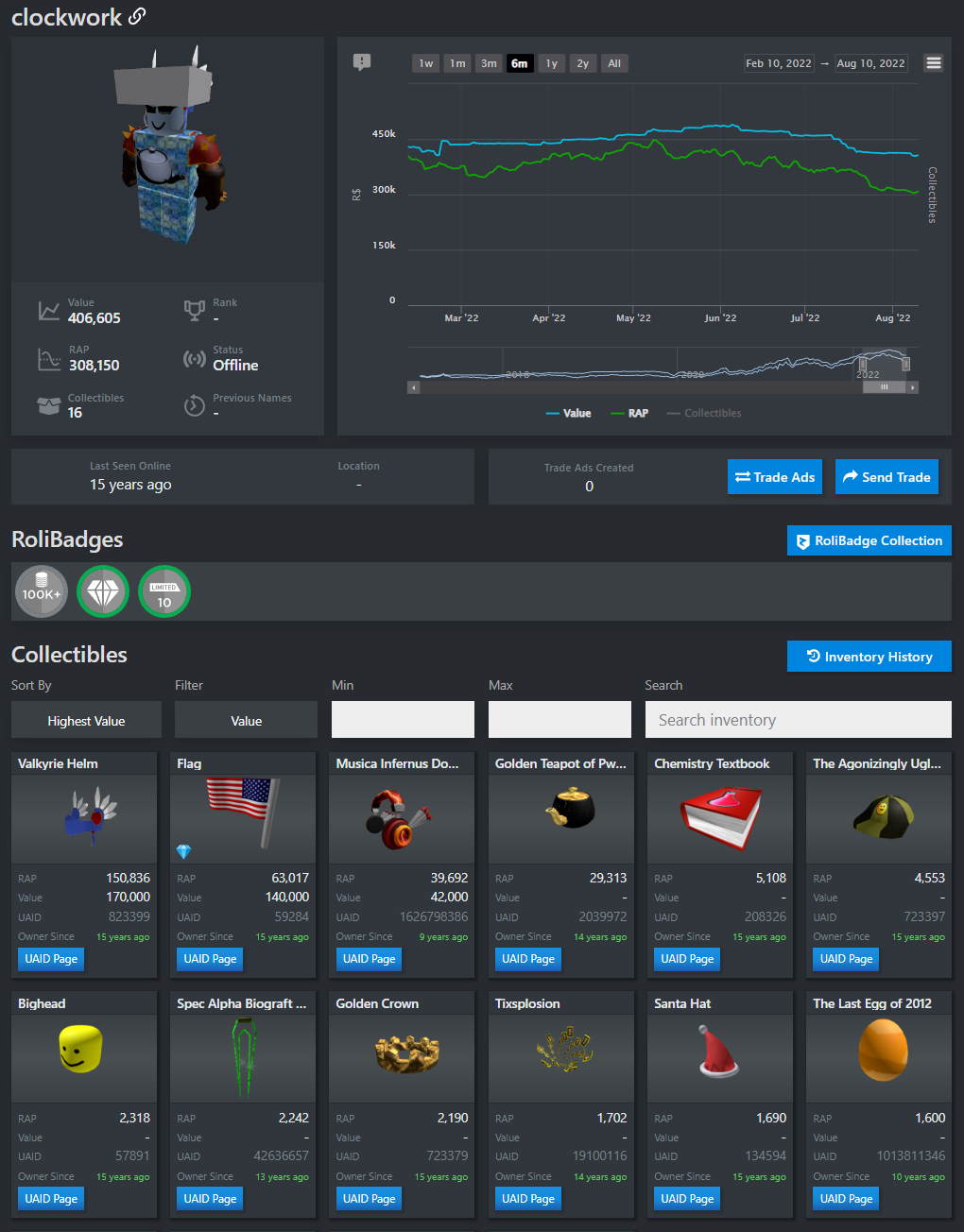 Clockwork's Headphones🔗
Released on November 27th 2007, these headphones became limited during the 2011 Black Friday sale which sparked the beginning of an era. The Clockwork Headphones have a sale quantity of only 1,413 leading to its scarcity.

Clockwork's Shades🔗
The Yin to the Yang, every Clockwork avatar cannot be complete without these shades, which were originally released on the 13th of June 2009 with the purchase price of 19,358 Robux before becoming limited on September 22nd 2009.

These insanely sought-after shades have a mere 387 copies, with many retextures being published as the years progressed (shown later in this article).

As you may have noticed, the name Workclock is the rearrangement of Clockwork, the original series. It is simply a white variety of the higher valued black version.

The headphone and shades set have been released multiple times in the past with notable occurrences during the Black Friday Sale of 2015 with the price being 1,337 R$ with the latter sales taking place on Memorial Day Sales in 2016/2017/2019, along with the Labor Day Sales.

The fascination behind this wonder of an item is primarily due to the aesthetics, being such a simplistic item that can go well with a majority of outfits. The value factor also allows for the huge demand for these items.

The black variety is currently selling for around 800,000 Robux... out of this world, I know! The Workclock series being a fraction of that price whilst having the same mesh has driven players to obtain this iconic item whenever it was on sale.

Workclock Headphones🔗 have been released multiple times in the past with notable occurrences during the Black Friday Sale of 2015 with the price being 1,337 R$ with the latter sales taking place on Memorial Day Sales in 2016/2017/2019, along with the Labor Day Sales.

Workclock Shades🔗 are the inverted colours of the original Clockwork Shades and were published on November 20, 2014, with their price being 10,000 Robux during special sales until 2019, which were often sold alongside the above matching Workclock Headphones. Before this beauty went off-sale, it was purchased 6,267 times.

The Workclocks are part of the Clockwork series which include several headphones and shades.

Due to the popularity of the series, Roblox decided to create many retextures of the well-known set many of which remain off-sale with some having become limited. Below are said retextures which range from colour changes to different meshes but still retain that familiar look. These include the:

As you may know, a retexture is a texture that has been edited to have a different skin whilst keeping the same mesh. The Clockwork Shades have undergone many retexturing which include the Sparkle Time texture and the Bombastic Texture alongside some Mesh changes, these include: 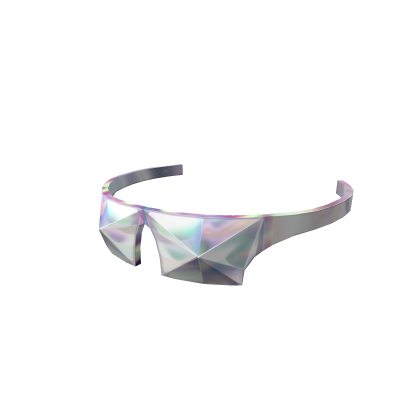 The Meta Shades🔗 follow a retro style which were published in the avatar shop on November 16th 2020 and was part of the Ready Player Two event. This item was obtained 269,159 times and has been favorited 57k times.

The Ultimate series of the famous Clockwork series has an additional hint of awe which is the Sparkle Time texture.. but what is this exactly? The Sparkle Time Texture is reserved for special items; these have a crystal-like appearance with vibrant and bright aesthetics.

The WC (Workclock) & CW (Clockwork) Ultimate series has this texture applied to them with all of these items having been made limited with vast demand. The series originated around 2017 with the price of purchase being 20,000 Robux for varied times such as the 6-hour time and the 12-hour timer, however the WC Ultimates: Pink Diamond Distraction came out of the Musical Gift of Pink Diamonds which would have been purchased for 25,000 and was on a timer for 24 hours before going off-sale.

These luscious headphones have a reputation of their own of being the best of both worlds and whilst the majority of the Ultimate series has not surpassed the original clockwork headphones; some such as the WC Ultimates: Pink Diamond Distraction fetch a price far beyond the originals.

It should be noted that the WC variety of the Ultimates usually fetch a lower price than the CW Ultimates with the main difference being the copies available and the colour depth with the CW's being a deeper shade of hue.

The CW series consist of a darker colour shade to the WC variety:

Roblox has had a tradition of releasing items that can only be obtained through the redemption of Gift Cards which depending on the location of purchase would yield a different item. The Adurite Headphones kept up with this tradition and were available when redeeming a $25 ROBLOX card from Walmart in August 2014.

What Is With the Recent Sales?

Roblox has recently resumed its tradition of making off-sale items limited, with the first occurrence being Sinister S which went limited on the 15th of May and fueled speculation that Roblox may be rereleasing the Workclock series as a limited item.

On the 30th of May, Robloxians were greeted with the arrival of BIG Head becoming limited which sparked a frenzy of players flooding Discord servers and forums for any information on the notorious headphones going limited. This speculation was based on the fact that the BIG Head and Clockwork series had previously gone off-sale hand in hand in the Memorial Day Sale of 2019. Players were left disappointed when this was not the case.

Many more limiteds were released such as the BIG Silverthorn Antlers and the BIG Purple Banded Top Hat... remember this for a later article for when the Clockwork may release!

On to the juicy part... when will the Clockwork series come out? As you can see there is a pattern to Roblox releasing new limiteds such as the BIG series and the Sinister series. There is a theme as to which items will be going limited since a large majority of items that went limited have also been a part of the Midnight sale.

But What About the Workclocks!?

Focusing on this pattern, it would make sense that Roblox will release the Workclocks as limited due to the fact the other retextures of Clockwork went limited. Regarding the 4th of July sale, there were many speculations that Roblox would release the red, blue, and white variety of Clockworks to commemorate the American flag.

To the surprise of many Roblox made the Blue Clockwork Headphones limited, which sparked a frenzy for the white retexture following suit. As of the writing of this article, this has yet to occur.

Going forward, there is a chance the other Workclock variants will be released as limited on the next sale which could be the Labor Day Sale on the 5th of September. Roblox may also simply release these at a moment's notice as we have seen happen before.